Grid Interactive systems work with the utility grid to optimize efficiency. When the sun is 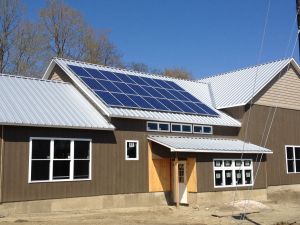 shining and your solar electric system is producing power, the system’s first priority is to power your house. If a surplus of power is being produced, the system feeds the excess back to the grid — spinning your utility meter backwards with the potential of earning you a passive income. If your PV system is not producing enough energy to power your house (like at night), power is automatically brought in from the grid to do the job. 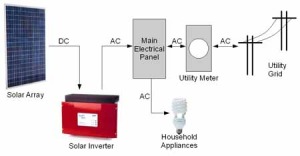 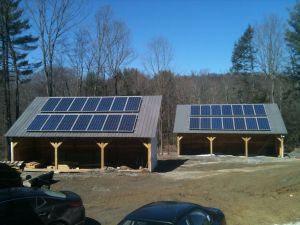 with the security of having backup power during a power outage. They also allow for other power generating components to be linked into the system such as Wind, Micro Hydro turbines, or Fuel Cells. Again, these systems feed excess electricity back to the grid in the same way that a grid-tie system does, as well as providing power during power failures. You can still roll back your meter just as you would with a straight grid-tied system. 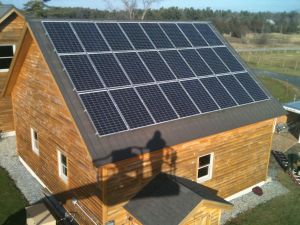 surpassing the quality of grid service to a remote site — often at a fraction of the cost. Generally, Off-Grid Systems differ from Grid-Tied Systems in that they require larger battery banks, and are used in conjunction with several generating sources (such as wind or micro-hydro), to provide a redundant power source for year-round operation — stand-alone Photovoltaic Systems tend to favor the summer months. 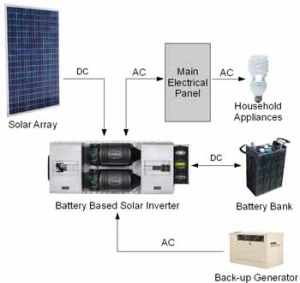 Photovoltaic systems converts sunlight into electricity by using the mass of a photon (a little piece of sunlight or a sun beam) to dislodge an electron on a solar collector. This causes a difference in Electrical Potential (Voltage). The groups of these dislodged electrons that accumulate over a period of time (a Current), is called an Ampere, or Amp. Together the Current of Electrons (Amps) multiplied by their Potential (Volts), gives a measurable unit of Power that we can use to do stuff — we talk about power in quanties called Watts. (Amps x Volts = Watts).

So, 1000 Watts ( 1 KiloWatt) used for an hour is a KiloWattHour (1kwh). These are the units the glass meter thingy on your house uses, and thats also the unit the power company uses to charge you money every month. Anyway, that power is then run through a machine (an Inverter) that processes the current and turns it into AC power, which is the type most home appliances are designed to run off of.